The following is a chapter taken from my latest book, Lycanthrope Rising: The True Story Behind The Vampire-Werewolf Wars, Book II in the Toronto Vampire Chronicles. It goes on sale on Oct. 1, 2017 and is available for pre-order now: http://amzn.to/2h6Dy73 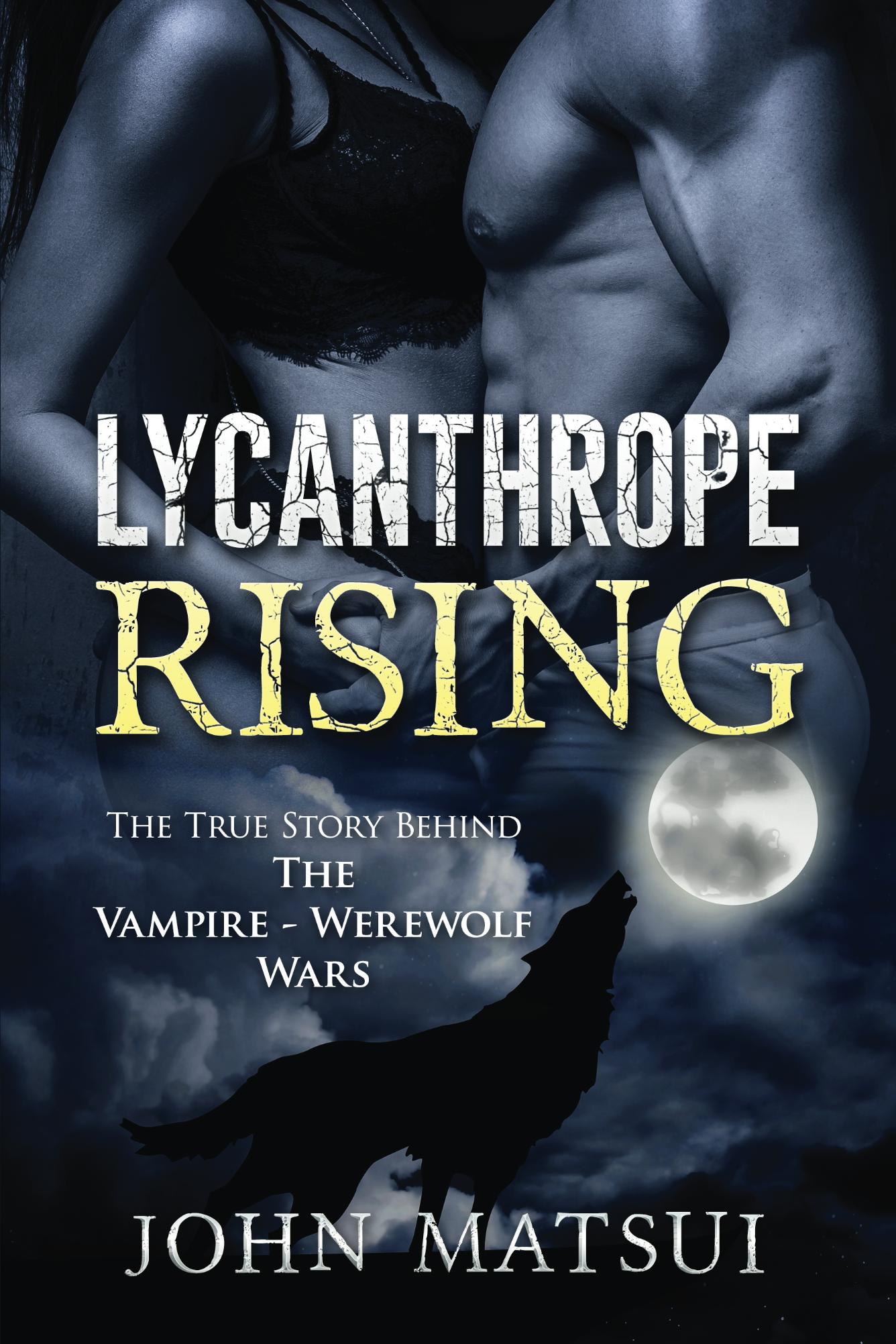 Playboy Tim Gracey is hell bent on self-destruction after the death of his father and the bankruptcy of the family’s  financial empire.  He seeks solace in booze, drugs, and loose women — which leads him to the Robin’s Nest, a strip club where he can get his needs met. There he’ll meet a stripper who goes by the show name Daughter Of Darkness who will introduce him to the dark world of the Lycanthrope Clan.

A waitress displaying more flesh than frock, approached with boobs blooming red and green from the rolling lights. Gracey recognized the quick scan she gave him.

Despite his too-many-Tequilas pallor, he figured his Stefano Beyer wingtips, cashmere jacket, perfect teeth and $300 haircut assured her he’d tip better than the usual crowd of sweaty losers. The waitress gave an overly toothy welcome and, responding to his index-thumb formed ‘J,’ dropped a bottle of Jack before the newcomer.

Curly, the muscle-bound bald guy, doubled as MC, and tapped the mike for attention. “Gentlemen, we have a special treat tonight. Appearing for the first time on our stage, I give you the one, the only, the amazing Rita, Daughter of Darkness.”

Gracey found the announcement by the Mr. Clean clone unusual and funny.

These strip club guys never give the broads a personal introduction beyond their stripper name: ‘Here’s Crystal’ or ‘Anastasia on deck.’ They’re just meat on a conveyor belt served up one after the other.

What’s the big deal? In the era of breast implants, as Rodney Dangerfield articulated, once you’ve seen one, you’ve seen ‘em both. And Daughter of Darkness? Wasn’t that the title of a corny Tom Jones song from the 60s or 70s?

Instead of the Welsh crooner, the sound system struck up the ‘60s Beatle tune Something In The Way She Moves. The Daughter Of Darkness walked from the shadows and into the spotlight.

In this shit-hole of a day, Gracey found a second moment of amusement.

The notion and the coke buzz still held Gracey’s attention when he realized the usual banter and snickers by the loud mouths, geeks, and perverts had stopped. All eyes, men and women’s, followed the movements of the ‘just-legal-age’ dancer. Not because of her beauty, although she was beautiful. Not because of her sexuality, although hormones hammering the red zone drenched the air.

Maybe it was the drugs but Gracey’s eyes could no more move from her than they could stop watching a 747 slam into the Twin Towers. A blink threatened to short-change him of that seductive something that oozed from her.

Something, I get it now.

She radiated danger, dangerous sex, like anything could and would happen.

And I get her show name.

Gracey gasped for air, realizing he hadn’t drawn breath since her first stilettoed heel hit the spotlight. And the part where she dropped clothing hadn’t begun.

The girl was a stunner.

As Something launched into riff 3, Rita started an agonizingly slow gyration/strip that inched away her black string bikini top, finally revealing the goods. And good they were.

She set the string top twirling helicopter style, a practiced standard of strippers past and present. Greedy smiles abounded. That’s when the collective but unspoken What? happened.

The Daughter of Darkness vanished the flimsy bikini top and magically replaced it with a bullwhip, 50 feet of plaited rage. She sent the twisted, hissing knot of scorched leather across the stage and into the audience. Sharp barks announced its travels.

“Holy shit! Where did that come from?” said pudgy guy in stained sweat pants.

“I don’t think she pulled it out of her sleeve,” short, hairy table companion remarked.

“She doesn’t have any sleeves.”

Once she had, as the saying goes, the audience’s undivided attention, the Daughter of Darkness played provocatively with the whip’s handle – a 12-inch ebony phallus that, slowly, excruciatingly, orbited each potential orifice.

Beams of crimson, gold and cyan rebounded from the lascivious gyrations into a frothy aura of chromatic anti-shadows that danced like orgasmic spectres.

The stripper responded as if in a trance. She writhed, whirled her neck and arms in lethargic rhapsody, and released the whip. It did not fall. The long, leather braid, imbued with serpentine life, slithered suggestively along her arm and around her head and neck. It coursed over her torso’s every curve and feature, teasingly advanced, and encircled her waist. It snaked down to one slender ankle before entwining itself around the calf.

Heads jerked to attention. The handle lay in her hand. The cracker end darted into the audience. Baseball caps flicked from the heads of three whip-fanned patrons.

“Hats off boys in the presence of a lady.”

The whip spoke to pudgy guy, an inch from his face, adding yet another stain to his sweat pants.

The bullwhip stretched out, this time upward, anchoring to an unseen beam high above the seats.

She leaped from the stage as if from a diving platform, a perfect full gainer but for the caducean marriage of whip and leg. The momentum propelled her upside-down leaving mouth-breathers along a wide arc with a slap or caress they’d take to their grave.

The orbit complete, Rita landed cat-like on stage. She flicked her wrist to release the whip and lashed it toward Gracey. The cracker ensnared the bottle of Jack Daniels and yanked it to her. Rita snared the inverted glass missile in her left hand, directed a stream of the amber liquid between her ruby lips, and cast the bottle aside.

Drool stalactites quivered from watchers’ lower lips as the Daughter of Darkness delivered the two final beguiling and terrifying cracks.

She whirled the whip like a black lasso until it blurred and resumed its string bikini form. The music ended. The stage darkened. No one spoke.

All eyes, male and female, customer and staff, remained on her.

All of Gracey’s senses screamed they’d witnessed black magic. He breathed in the Daughter of Darkness’ lingering musk. He was alive, alive for the first time since the whole mess began. He needed more of this woman’s raw, pulsating sensuousness, more of her sexual danger, more of her magic.

The Daughter Of Darkness stood at the stage’s shadowy edge and hooked her stripper top in place. She raised her nose and inhaled in a motion that swept the room. The panorama of stale beer, spilt whiskey, sweat, and organic dribbles registered no interest until . . .

As electrifying as a bolt of lightning, a primordial scent struck mid-sniff. With predator fixation, she focused on her target. Her wolf-like glare mesmerized Gracey in a way that petrified and exhilarated.

Before he could think, she was on him, sniffing his head, neck and genitals. She coiled around him like a python. In a single long movement, her tongue licked him from neck to forehead and, satisfied, she gave a ravenous leer.

“Take me away from here.”

Gracey’s lips quivered dumb nothings but his body jumped to a stand at her command. Primeval urges poked and tugged – not love but things wickedly scrawled in his DNA – more than hunger, more than lust, more than anything the language of man can describe.

Rita clasped the lapel of his Brioni jacket, peeled it from his body and slipped it over her own. Her aura pulled him toward the exit.

The music started anew and another stripper hit the stage.

Gracey heard a velvety growl from Rita and, in response, an equally deep-edged thunder started in his abdomen and became a low howl when it cleared his throat.

The throbbing music and the new gyrating eye candy attracted no viewers. All attention remained focused on Rita.

“Where do you think you’re going? You’re up two more times tonight.”

He gave a pale, pantywaist gulp. She pushed and he swung aside like a saloon door. Without instruction, Rita walked straight to the Bentley and climbed in. Gracey ran to the driver’s side faster than he imagined he could.

This was an adventure he needed with all his heart. He had only one question: Is this an experience I’ll survive?

Thoughts on life, the universe and everything - through books

I read and review books.

The latest news on WordPress.com and the WordPress community.

Recipe for maximum joy: Coffee, a Blanket, and a Good Book